Dr. Takalkar was an exemplary student and as such has received several university and state level awards for academic excellence as enlisted below:

Dr. Takalkar has been conferred membership and fellowship by several national and international societies due to his diligent efforts in the field of gastroenterology and oncology.

Academics: Dr. Takalkar has worked in academics for almost a decade wherein he worked diligently to train the budding young minds in various intricacies of surgical procedures. He is also a MUHS approved guide for advanced fellowship in gastrointestinal endoscopy and breast surgery since 2016. His tenure in academic is enlisted below:

Due to his affinity for academics following Diploma & Fellowship Courses are offered at United CIIGMA Hospital:

Kodlikeri Memorial Hospital: Kodlikeri Memorial Hospital was solely a gynaecology set-up at the time of Dr. Takalkar’s appointment in 1997. During his tenure, Dr. Takalkar introduced newer specialties at the hospital such as: Surgical Oncology, Gastroenterology, Chemotherapy and General Surgery. These steps saw an increase in patient number at the hospital. 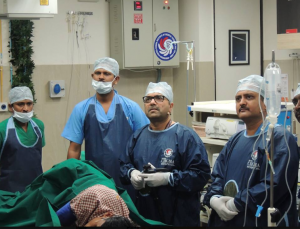 to the foundation of United CIIGMA Hospital in 2009 which took a final shape in 2013. This was one of a kind set-up which provided respite to many patients without foregoing the economics. His zeal to excellence paved way to upgradation of Marathwada’s medical industry as advanced medical facilities of various specialties were introduced

Statistics: Approximate procedures performed and supervised by Dr. Takalkar till date are:

CIIGMA Health Foundation:CIIGMA Health Foundation was founded by Dr. Takalkar with the aim – ‘Together towards Hope and Care.’ As the motto suggests, Dr. Takalkar lends a helping hand to give hope to patients who otherwise cannot afford state-of-art medical care as is the basic right of every patient. Various activities are conducted by this foundation such as: free medical aid, mobile clinic set-up in nearby villages, research activities etc. It also promotes medical education by conducting CMEs, awareness programs and providing financial aid to needy medical students.